I was called by a customer about a suspected mold problem in his attic. He then told me he thought there may be a roof leak because it sounded like water was dripping. I went out to investigate. Sure enough it was raining in his attic. The roofing nails were collecting water vapor and dripping back down on to the insulation and air handler. The plywood roof sheathing was so wet it looked like a sheet of water was cascading down the surface. The gable end was completely covered with wet slimy black mold.

So I said, “how long has this been going on?”. He said “just this winter”. My next question was, “what conditions have changed since last year?”. He said “we got a new roof a few months ago”.

This is what happened. The roofer installed a rolled ridge vent that completely collapsed upon installation of the ridge caps. Water vapor could not escape the attic. The solution was a new collapse resistant ridge vent. Problem solved. I am sure that at least one roofing contractor wanted to install the correct vent, which cost more, and was outbid and didn’t get the job.

The cost to the client. He not only had to pay for a new ridge vent to be installed but also had to pay for the mold remediation of his attic. Did the first roofing contractor do him wrong on purpose? Probably not.  The roofing contractor is not a ventilation specialist and probably didn’t know any better. In this case the roofing contractor had been using the same ridge vent for years without problems. The vent never worked but the problem of moisture retention did not present itself until the home was made more efficient. When the home was made more efficient the underperforming or improperly installed ridge vent was finally revealed.

With homes getting tighter and tighter as a result of energy conservation, more attention needs to given to indoor air quality and ventilation issues across the board. 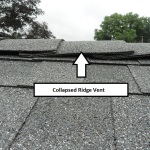 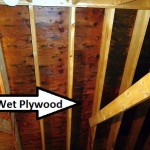